Happy Halloween, All Hallows Eve, Samhain, Martinmas, and if you’re a witch then Happy New Year!

So with pumpkins carved and at the door, it’s time to celebrate Halloween, and so with that in mind I thought I share some of my families favourite Halloween reads.  The books were chosen by my small people and the words are all their own too… 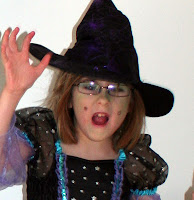 The Winnie books are good for Halloween because there are witches and they do silly magic tricks, well not magic TRICKS – BUT ACTUAL MAGIC! 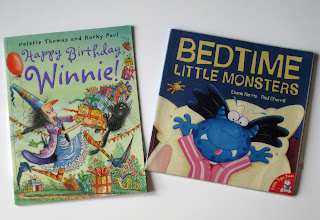 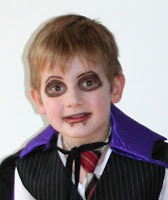 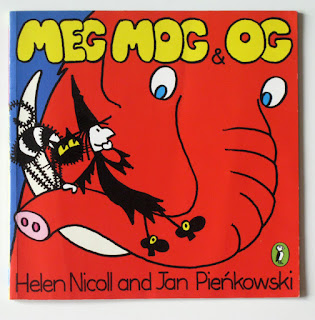 Meg and Mog Books by Helen Nicoll and Jan Pieñkowski

Because they are FUNNY! ‘The Graveyard Book’ By Neil Gaiman

I only discovered this book this year and, well, was absolutely blown away. The first line is one of the best openings ever… and had me hooked…

‘The knife had done almost everything it was brought to that house to do, both the blade and the handle were wet.’

Then the wielder of the knife goes to finish the job, but his final target the baby has gone, climbed out of his cot, down the stairs, out the open door and into the grave yard. The baby is found by the residents of the graveyard – the dead, who raise him giving him the freedom of their home. The story follows the baby, called ‘Nobody’, as he grows and as he interacts with the graveyard residents and has adventures.

The story is as beautiful as it is macabre, with real emotion and brilliantly crafted writing. But for me it’s the fabric of the story which gives it it’s strength. Its originality, woven together with legends and mythology create a rich narrative. I can’t tell you how excited I was when Nobody’s tutor, ‘Miss Lupescu,’  turned out to be a ‘Hell Hound’ – (well I actually shouted YES very loud in a hospital waiting room *cringe*)

The last thing I’ll say is the character Silas, Nobody’s guardian, is fabulous – not once in the whole book does it actually say what Silias is, but let’s see what you think. Silias unlike the other graveyard residents is not dead –although he’s not alive either – has the ability to leave the graveyard as he pleases. Silias is pale, imposing; he eats only one thing (which is unspecified). He also moves like…

‘…a familiar shadow swirled beneath the street lamps. Bod hesitated, as a flutter of night-black velvet resolved itself into a man-shape.’

Anyway this is a fabulous read any time of year, but especially at Halloween. 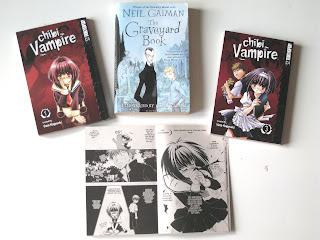 These are fabulously illustrated Manga graphic novels, about Karin, a vampire with a difference. Unlike the rest of her family, Karin does not like the dark, she loves garlic, and she doesn't drink blood, instead once a month she has an abundance of blood and has to bite people and give them her excess.

The books are YA Gothic Contemporary Comedy’s, and are fun quick reads, and well worth checking out.

And finally a firm family favourite published this year, nominated by my husband; 'The Totally Terrifying Three’ by Hiawyn Oram and David Melling. It’s a colourful tale that’s Halloweeny not matter how hard they try, The Terrifying Three will not scare your small people! 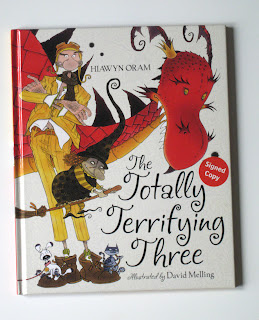 Email ThisBlogThis!Share to TwitterShare to FacebookShare to Pinterest
Labels: Books and Stuff..., Halloween