Hollywood is still romancing fairy tale’s buts it’s an up and down relationship, which leaves me asking if this were a film, would it be a Rom-Com or a Tragedy?

On the upside after the success of, Snow White and the Huntsman, Universal has signed off two sequels. The first is currently in pre-production. Another indication that things are going well for this courtship is that 78 year old, Oscar winner, Shirley MacLaine is rumoured to be playing the title role in the TV Motive adaption of Mother Goose, due out in 2014.

However the signs that fairy tales are falling from favour in the eyes of Hollywood are showing. Within weeks of each other both Paramount and Warner Bros have pushed back their big Fairy Tale movies from dates in 2012 to 2013.

The Bryan Singer directed, Jack The Giant Killer, had realised trailers and posters but then had the release dated pushed back by Warner Bros from June 2012 to March 2013. The rumours and reports on the web is that there are issues with the script.

This comes after Hansel and Gretel Witch Hunters had the same treatment from Paramount. The Film starring Jeremy Renner and Gemma Atherton was due to be realised in March 2012 but has been pushed back almost a year to February 2013.

What does this mean? Although Snow White and the Huntsman, is set for a happily ever after, the other fairy tale adaptions are rife with rumours of bad scripting and fuzzy plots. It may be an indication that Hollywood hasn’t quite got the essence of fairy tales. Yet tragedy may still be adverted, as we are still to see the Guillermo del Torro’s, Pinocchio and Beauty and Beast, and if any one can make a good fairy tale movie it’s going to be the writer /director of Pans labyrinth.

Wheather this current Hollywood fascination with fairy tale and folk lore is set to become tradgy or rom-com is unclear, but what is known is that there are still lots of tinsel-town fairy tale make-overs set to come.

Personally I think that the studio should take a step back, give the scriptwriters a rest and read, find a good fairy tale inspired novel, and adapt that! If they are looking for suggestions, I nominate John Connell’s, Book of lost Things, which was on IMDB for a while as in pre-production but it dropped off. 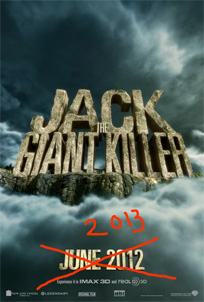