The Next Big Thing


The Next Big Thing

I have really enjoyed reading fellow writers The Next Big Thing blog posts. It’s really interesting and inspiring learning what other people are working on. Especially as usually we all know everyone is typing away engrossed it their stories, but rarely get a glimpse of what that stories actually is until the writer has polished it enough to let out of their grubby mitts for critiquing.

Thanks Jo Wyton for tagging me in, and if you haven’t read Jo’s blog press here. And without further ado here is my Next Big Thing Blog Post…

What is the working title of your book?

Journey to the Bone Factory

Where did the idea come from for the book?

A dream – I dreamt a scene that was so vivid I woke up and wrote it down.

What genre does your book fall under?
YA Sci-Fi / Fantasy / Dickensian - it’s a real mixed bag. However I've heard from agents that mixed genre is big at the moment; Russell T Davis’s CBBC Wizards Vs Aliens is evidence of this. So, with a bit of luck (fingers crossed) it still will still be ‘BIG’ when I'm submitting!

Which actors would you choose to play your characters in a movie rendition?

Maisie Williams from Game of Thrones, for the main protagonist Jack.

Max von Sydow  - as Gamps the Rag-Bonner gypsy of the stars that trades the universe most valued commodity –secrets.

Alex Pettifer - to play Zef, the young Rag'n'Boner who becomes Jacks friend and helps Jack to travel to The Bone Factory.


What is the one-sentence synopsis of your book?
Jack lives life by the rules until one day, he breaks every one, setting into motion events that’ll shake the whole galaxy, and sending him on a quest to a mysterious abandoned planet that’s home to The Bone Factory, and a prisoner so dangerous he’s been marooned on the furthest outpost of the galaxy.

Will your book be self-published or represented by an agency?
Hopefully Agency.

How long did it take you to write the first draft of your manuscript?
I’ll get back to you as it’s still WIP, but I'm hoping that the first draft will be complete by Christmas.

What other books would you compare this story to within your genre?
Going to answer this slightly differently - I would say this is Dickens V’s Firefly (although I only saw firefly after I started writing it)

Who or What inspired you to write this book?
As I said I had a dream which I wrote down, I then submitted the small piece of writing to my crit group and got a really positive response so I decided to continue working on it. I’ve never written Sci-fi before so it’s slightly daunting but the world that appeared in the dream was so well formed and visualised that it inspires me to write to try and capture some of its atmosphere and dog-eared beauty.

What else about your book might pique the reader’s interest?

Heaven’s Gate – the galaxy’s shanty town – home to the most poverty stricken folks, which is paradoxically paved in gold as the planet is solid pyrites or ‘fools Gold'

Rag’n’Boners – The gypsies of the stars that trade in rags and‘bones – the 'bones' being dead bodies.

A Bone Factory – where they recycle dead bodies into pillows, ceramics, candles and resins.

Dawn Finch
Who has two of my dreams jobs; being both a library Consultant and published author of ‘Brotherhood of Shades’! Fellow SCBOOIE and fan of dark literature. Check out Dawns Next Big Thing by Pressing Here.

Ozlem Yickici
Talented artist (I can say this as we studied Art together at uni so I know she’s talented!) writer, SCBOOIE and overall lovely person. Ozlem like me is Dyslexic and is writing YA fairy tale inspired books. To check out her Next Big Thing post Click Here.

Liah S Thorley
Travel Journalist with a theatrical past life and now writer of historical, sci-fi and fantasy (sometimes two at once) adults and YA books. Fellow Dyslexic and Abingdon Writer, to read about Liah’s Next Big Thing Press Here.

Also check out KM Lockwood, who Jo also tagged, to see what KM Lockwood's Next Big (Watery) Thing is Press Here.
Posted by Sally at 09:21 3 comments:

Literally translated Manga means, ‘whimsical sketches’ – and it is the name for Japanese graphic novels and comics. Manga became prevalent in the post WWII Japan; believed to have been born with the publication of  Osamu Tezuka's, ‘Mighty Atom’ or ‘Astro Boy’ in 1951.

The Manga I read is Shōjo Manga, which dates back to 1969 when a group of women manga artists known as ‘Year 24,’ debuted their Shōjo Manga’s, which is largely manga by women for women.

I was a late comer to Manga but have became a fan and at some points an addict when my mother (yes you read that right – my MOTHER) introduced me to ‘Fruits Basket’ by Natsuki Takaya. Since then I've read many Shōjo Manga series, being an artist and writer I'm drawn to the way story is delivered by both the illustrations and text working together as one entity.  For stories where text is used frugally they pull you in with concepts, story arcs, characterization, and quality of writing to rival any well penned novel.

One thing that I have noticed, is that every Manga series I have read references WESTERN fairy tales. Of course they reference Japanese and also Chinese folktales and mythologies, but there seems to be an abundance of western fairy tales coming through too. So I thought I'd talk about how the Shojo Manga use western fairy tales, starting with Tachibana Higuchi's, ‘Gakuen Alice.’  In future blogs I will  talk about ‘Fruits Baskets’ by Natsuki Takaya, and ‘Grimms Manga’ by Ishiyama Kei. 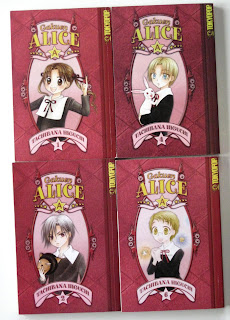 Gauken Alice or Alice Academe is about Miikan a 10 year old girl who travels to Tokyo to the Alice Academe in search of her best friend Hotaru. When she arrives Mikan finds that the Academe is a school for ‘gifted’ children who have superpowers called Alices.’  Mikan becomes enrolled as she too has a powerful alice, and soon discovers that the academe is much more sinister than it seems. 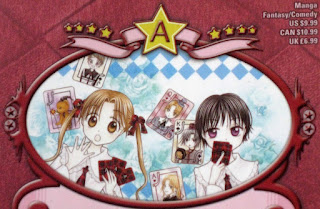 The Gakuen Alice books use a lot of western fairy tales, in addition to an on-going,  ‘Alice in Wonderland / Through the Looking Glass’ theme. The reason for the’ Alice in Wonderland’ references is probably due to the shared Alice in title, but is used repeatedly throughout the series, for example the front covers of every book refers to, Alice Looking Glass, as each character in framed in a mirror.   In addition many of the characters costumes are also Alice in Wonderland themed emulating Alice’s iconic pinafore dress or have white-rabbits hats or even have playing card motifs.

In book 3 chapter 12, the cover illustration has Hotaru and Mikan outside a house made of sweets, and then later in the chapter Mikan puts on a performance of ‘The Little Match Girl’ to earn money to buy sweets. 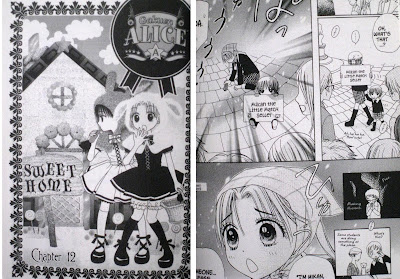 Then again in Book 5 chapter 23 the main characters do a play called, ‘The Sleeping Snow White in the Woods.’ The play has a mash up of Grimm’s fairy tales, (with a boy playing the princess) yet still preserves many of elements that construct western fairy tales.

With in the series the use of the western fairy tales puts Mikan again and again in the place of the poor fairy tale hero, having to overcome poverty and  adversity with just her wit. This is a clever reflection of Mikan's adventures throughout the series, where she is the poorest and most resented student within the school. Mikan character is also very much in accordance with western fairy tale heroines, she is naive, good natured, kind  and hard working yet suppressed by those who fear her.

The Gakuen Alice book’s are still being translated so I eagerly look forward to reading the rest of the series to see what other fairy tale delights are in stall for Mikan and her friends. 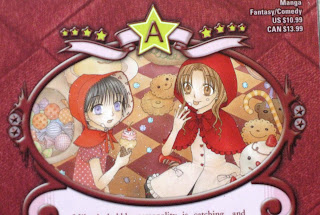 I hope you enjoyed reading this blog, and do comeback and read the other blogs in the series. Also I'm hoping to do more research about Western Fairy Tale in Manga, so if you can think of any examples, please let me know by leaving a comment , thanks!