It’s About to Get Cold; Here Comes the Snow Queen


It’s About to Get Cold; Here Comes the Snow Queen

The temperature is about dive in 2013 as Hans Christian-Anderson’s terrifying villain is making an appearance in not one but TWO animated adventures.

The first to hits screen will be the Russian made CGI Snow Queen, made by the up and coming Wizart Animation that was founded in 2007.  The Trailer has been realised and it look quite frankly amazing, visually stunning and dark too. Click here tosee Trailer

The next Snow Queen, animation adaptation is coming from the giant Disney corporation. Their project had a name change to FROZEN as Wizart had already pegged Snow queen. The project is further behind with a release date yet to be set but the stills look well stunning. Click here to go to theFROZEN blog

Usually the thought of snow makes me miserable, but I can make an exception here; bring on the snow! 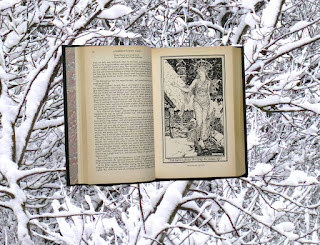 Review of; Gramarye: The Journal by The Sussex Centre for Folklore, Fairy Tale and Fantasy

Review of; Gramarye: The first edition of the Journal by The Sussex Centre for Folklore, Fairy Tale and Fantasy

Once upon a time I was a student studying Art & Related Art’s at University College Chichester. It was here where I re-kindled my childhood love of fairy Tales. In a second year art project I had to produce works based on a book given to me by another student. The book in question was Revolting Rhymes by Roald Dahl. This lead to me immersing myself in fairy tales working my way back to the older and often more darker tales.

For my degree show I produced a collection of paintings that commented on the misuse, censoring and editing of fairy tales. Some of my pieces were brought by local modern Art collector Paul Wilson.

How strange then that eleven years later I discovered that the Sussex Centre for Folklore and Fairytale (or SCFF for short) is based at the very university where my fairy tale passion was reawakened.

Gramarye  is the first edition of the journal by The Sussex Centre for Folklore, Fairy Tale and Fantasy. I was disappointed to miss its launch in May, but did get my copy delivered by post and greatly enjoyed it. So I thought I’d do a little review.

Firstly let me point out that I approached the journal from the perspective of a fairy tale enthusiast NOT a scholar.

Gramarye is firstly an aesthetically pleasing and well-constructed journal. It is a pleasure to read, with good size font and well considered illustrations to compliment the text. 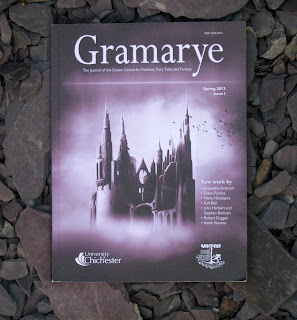 This first addition has papers by eight fairytale and folklorist, plus a preface by Chichester professor and journal editor William Gray. The preface has a lovely introduction to the journal and an explanation as to the many fascinating reasons why the name Gramarye was picked.

I won’t comment on every article in the journal, but I will say something about a few I most enjoyed and think I learnt the most from. Firstly I was absolutely fascinated by Jaqueline Simpson’s article ‘Terry Pratchett; A Vast Consumer of Folklore.  I also very much enjoyed learning about the Undomestic witch in Diane Purkiss’s article ‘The Undomestic Witch: Scottish Witches, fairies and the Old Religions.

To me though, Maria Nikolajeva’s piece entitled ‘My Favourite Story when I was Young’ was particularly interesting. Maria shares with us her experiences of fairy tales from her childhood, and the differences in our cultures. Stating, rather interestingly; ‘In my culture, there was no practice of retelling scary books into nice and cute ones, nor selecting only stories deemed suitable for children…’She then goes on to tell us about her favourite Han’s Christian-Andersen tales, explaining how she was drawn to the ‘dark and enigmatic stories’. This struck a cord with me, as when I was a child, I too preferred the darker more gory tales, like The Girl with Red Shoes, returning to them again and again. 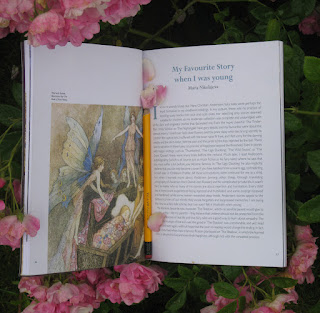 Another article I found particularly intriguing was Karl Bells ‘The Legend of Spring-Healed Jack; Urban Folklore and Victorian Popular Cultures’. In it he charts the rise and fall of  London based folklore trickster Spring-Healed Jack, who terrorised the London streets through mischief and attack, before enacting daring escapes across the rooftops of London.

These are just a few of the fantastic articles in the journal. Of which I could prattle on about for ages. I won’t though, instead I urge you to log on to the University’s web-site (press here) and order your own copy, it’s a bargain at £8.00 which also includes postage to mainland UK.