The House of Books: Books in the house is good for children. Is your a home a book house?

I read a disturbing article the other day which said that 9 year olds in the UK are more likely to own a mobile phone than their own book press here for link. This was a completely bizarre notion to me. I have an eight year old, and I have never entertained the idea of giving her a mobile. However I was flawed by the prospect of kid’s not having books.

When we recently built a house and moved in, we had three priorities for furniture, 1) Beds, 2) Sofa and 3) Bookcases for the kids’ books. Now having just spent every bean on the house we had to make the shelves out of begged, borrowed and stolen wood. The kids helped and we made a reading corner for each of them in their rooms.

The children have books. Lots of books. That’s not to say we spend a fortune on them, they have my old book from when I was a child, books we buy in charity shops (one local one has five books for £1 for adult books, and kids’ books at 10p each.) Then we have the books that are gifts or brought new. The kids love books and from tiny children would look at picture books for hours. But then there have always been books in the house. 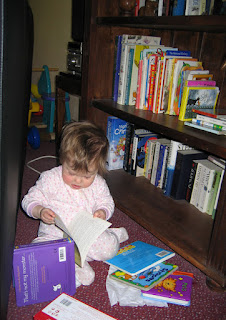 I’ve just had a quick count; we have 6 bookcases, one for each child. One for YA and my TBR (to be read pile) one that houses reference and non-fiction books, one that’s mostly fairy tales and folklore, and one of DVD’s (well come on). Ophs; I forgot, another for sheet music, and a further one for writing guides. That’s a lot of books!

So why so many? Well I love them as objects, they are much more interesting to me then ornaments, plus they reflect who you are as a person. I have some book that are just fabulous because, they are outdated but beautiful like my 1950’s sex education guide, or some obscure picture books, all sourced in jumble sales.

So with the new kindle revolution I have been thinking; are we antiquated? Are we obsessive? Well in all honesty; probably, but yesterday there was an article in the daily telegraph that made me feel much better about our book collection.

The article states that the amount of books in a childs home has an impact on their education saying that ‘A child raised in a household with a 500-book library would result in a child remaining in education for an average of three years longer than those with little access to literature.’ It also went on to say that the number of books can impact the child’s earning potential as an adult and  that research ‘suggests that filling homes with a range of novels and reference books may be the difference between leaving school at 18 and going to university, which can be worth up to £200,000 more in lifetime earnings.’

You may say that the amount of books is related to income and earnings, and that fewer books or no books, as sign or poverty. That is of course partly (sadly) true, but there are still library’s, Book Crossing, and as I said bargain books to be found in charity shops, and not to mention associations like Book Trust that give every child books in their early years.

But one thing this article shows is that books have a positive influence on children just by simply being part of the environment that they live in. (kick that kindle!)

Earlier this month saw the release of the movie; ‘Mirror Mirror’, the first of a whole batch of fairy tales that have been given the Hollywood makeover. We have the joy of a Hansel and Gretel the Witch Hunters, Snow White and the Huntsman, and Jack The Giant Killer, to come (for more details of upcoming Fairytale movies check out my pervious blogs, 2012 Year of the Fairy Tale Part 1 & Part 2)

So this got me thinking about the fairy tale films, and after a trip down memory lane, I’ve worked something out. I not that fond of fairy tale movies! Red Riding Hood, Brothers Grimm, Ever After, they all seem to me to be, well - to glossy, to fluffy, to Hollywood.  For other examples, see Total Films list oftop 50 fairy tale movies.

So to my mind the best fairy tale films are those which are not set out to be fairy tales, here are a few of my favourite…

The Princess Bride – 1987 – Cary Ewes, Robin Wright - I know this is a fairy tale through and through. But this is the only one that obvious so hear me out – Yes its Hollywood, yes the stars are glossy with perfect teeth but, it is on my list because it set the ground for the likes of Shrek, Hoodwinked and Ella Enchanted. It’s the original and the best, a fairytale, that’s tongue in check and funny on multiple levels.

Pans Labyrinth – 2006 - You may be saying, it’s a tale about fairies not at fairy tale. Well I disagree, although most fairy tales are absent of fairies, all the elements of a fairytale in present in this dark visual feast of a production.  It hits the fear factor on a primal level, and really gets to the cranks of fairy tales; sibling rivalry, danger from the parental figures, monsters, magic and deception. And let’s not forget an ending that’s as dark as it is happy.

Roman Holiday – 1953 – Audrey Hepburn and Gregory Peck- Oh, you may say; so not a fairy tale. Oh yes it is I counter. It’s Cinderella in reverse and she doesn’t get her man. So, so, so a fairy tale, and a brilliant film.

Deliverance – 1972 – Jon Voight, Burt Reynolds. Not a Fairy tale? Come on; lost in the woods, hunted down by locals. All the hillbilly’s need is dog heads, and its Grimm all over.

The Last Unicorn -1982 – Animated.  If you’re talking fairy tale films you need an animated one in there somewhere. So here it is, it's not Disney (no surprise there), but by, Incorporated Television Programme Company, based on Peter S beagles classic book.   If you’ve not seen then them I urge you to do so, it’s a fantasy yarn with fairy tale heritage and a typical bittersweet fairy tale ending.

So finally, please help me. Tell me what you think is a good fairy tale film, and why.  Leave your comments, as I’m truly interested on what you think, and have any films I haven’t seen I’ll go watch and feedback to you my thoughts.
Posted by Sally at 12:07 4 comments: