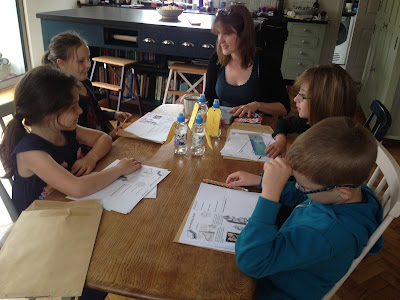 So this summer has been one of firsts; first job in over a decade, my eldest child’s first days in secondary school, first submission with an agent, but perhaps the most nerve wracking – my first small group creative writing session.

I submitted a lot to a charity blind auction, a creative writing session for a small group of children. To my utter surprise the lot was brought, and therefore I began preparing. The group was four children of varying ages and ability; one six year old, one seven year old, one nine year old and an eleven year old. The winner of the lot asked specifically if I could do a session to try and inspire her daughters to write; make it exciting!

After a lot of thought, I decided that the session had to be three things…

So I planned some activities based around the notion that EVERTHING is exciting, no matter how mundane it may initially appear, as long as you allow your imagination to run free.

So we started with a food. I asked the children,

How exciting is a sandwich?

To which I received the expected answer: not very – or - not at all. So I read a passage out of the Dave Shelton book, ‘A Boy and a Bear in a Boat,’ about the heroic antics of the VLS, VERY LAST SANDWICH. All the children giggled and gawped, and I could see that they were opening up to the concept that in creative writing there are no rules, and that you are only restricted by the scope of your imagination. 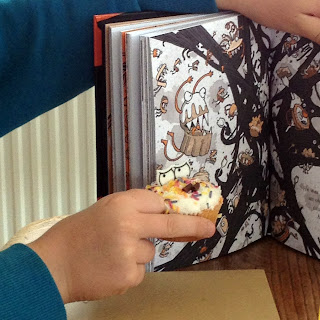 We then talked about other foods with exciting properties, like the cakes from Sarah McIntyre’s and Philip Reeves Cakes in Space, and we even made our own cake monsters. The discussion also covered food from Harry Potter, George‘s Marvellous Medicine and then the land of the most exciting food, Wonderland. To make the talk interactive we drunk from bottles marked ‘Drink Me’ and ate mushroom sweets and pretended to shrink and grow.

“My daughters had a wonderful time during the creative writing session with Sally. I was very impressed by the amount of effort that she put into preparing for it. She kept the girls engaged and gently led them back to their writing piece when they got distracted. It has really helped them to see literacy in a more fun way and hopefully they will bring this enthusiasm with them into the next school year.” From Mrs O


After all the excitement we sat down and talked about each child’s favourite food, and started to think how that food could be exciting, and then began to build a story around it. To make the session easier I provided each child with a pre-prepared pack with story wheels, and vocabulary sheets. All the children’s imaginations soon warmed up and their stories became magical and exciting. It was lovely to see them al enjoying their own crazy worlds and ideas. 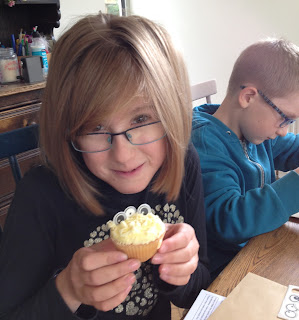 The session was short, but the children really seemed to have fun, and took to the notion that writing can be fun. To help the children to continue to develop a love of writing, I sent them so additional activities through the post in the following weeks.

I am very pleased at how my first small creative writing session has gone, and will certainly be thinking of ways to improve and develop it for the future sessions. But one thing I know for sure, it has to be exciting and interactive and most of all fun!