Pondering the Ethics of Cloning Mammoths for this new Millennia + the Wobbles of a Neuro Diverse Writer. 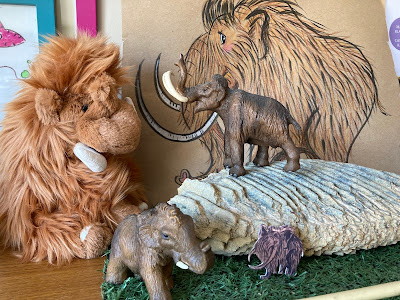 Any one that knows me will tell you I like mammoths. In fact they’d probably say that is a mammoth understatement. So I am very excited about the recent mammoth news. You have probably seen the headlines that a company has donated fifteen million dollars to George Church’s Mammoth Rival Project to speed up the process of cloning a mammoth by editing the genes of modern Asian elephants. This is to create a kind of elephant-mammoth hybrid, capable of enduring Siberian winters, in an effort to curb the rate of global warming; The creatures will do this by roaming tundra breaking up the blanket of snow that insulates the ground, warming up and causing the permafrost to melt, that would release locked methane gasses into the atmosphere.

I am excited as this is the inspiration behind my current middle grade WIP. I actually came on the premise of the novel by accident whilst researching for a YA Sci-Fi Thriller about Neanderthal cloning, when reading about the science of de-extinction in Beth Shaprio’s book ‘How to Clone a Mammoth’. Of course Neanderthals are great, especially as almost everyone on the planet (except for those in the African Basin) have a percentage of Neanderthal DNA, but let’s face its mammoths are cuter, they have just more appeal, so I got distracted. 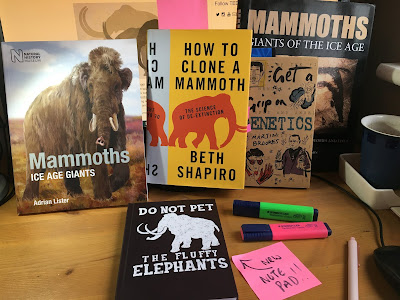 The distraction was that mammoths have a potential to help with the global warming problem and also a protentional place ready to house them in the form of the Pleistocene Park in Siberia. I thought that children of today with their concern for the planet, its non-human inhabitants and an increasing love to STEM subjects would find this interesting. The fact there are scientific solutions to the massive issue of global warming, that could work in combination with other methods , like eating less meat , changing to greener power and reducing plastic.

Of course I don’t actually think we should necessarily turn to cloning extinct creatures, after all there are other non-extinct species that can do the same thing like camels and bison, which are already being re-introduced to the tundra as part of the Project at Pleistocene Park. 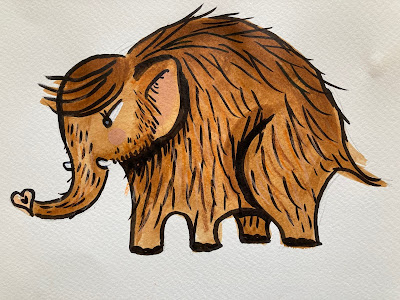 Also there are a great many ethical issues to consider, like the welfare of the modern Asian Elephant mothers, and should we be editing the genes of an already endangered species rather than helping the breading of that host species.

However, I would hope my story may inspire children to look into cloning, as it's methods can be utilised to help endangered species. Like, Elizabeth Ann, the black-footed ferret, who was cloned from a ferret that died more than 30 years before she was born. This kind of cloning means you can inject genetic diversity into dwindling population giving them a better chance of regaining numbers and avoiding extinction. This is work that is supported by the Revive and Restore initiative.

So of course the mammoth news, is exciting but uncomfortable, both due to the big question SHOULD WE. But also on a more selfish and personal note for me. I have been writing this novel for a while, and very few people I spoke to about it, had ever heard of the Mammoth Revival Project. But now it’s big news, and with me having issues with spelling and grammar due to Dyslexia, I can take a little longer than most to get my work submission ready. So, I’m worried someone will now see this news, and work this concept up into a submit-able manuscript and pit me to the post whilst I’m still making mine conform to the English language. It may sound like I’m being ridiculously paranoid, but this has happen many times in the past, so it is rather raw injury.

So that is me, done, and off to feverously try and get my manuscript polished ready for submission. Wish me luck! 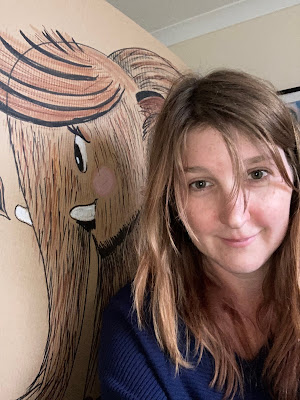 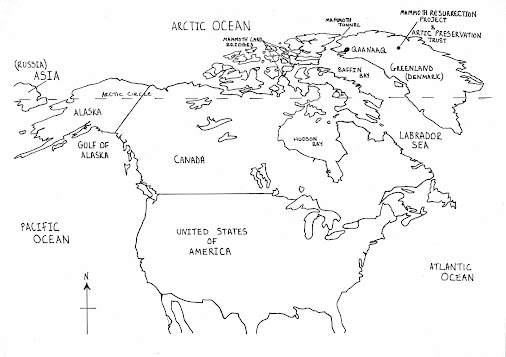 I love a good map. The first map I ever saw in a book, was Tolkien’s map of Middle Earth in The Hobbit, when my mother red it to us when I was a child. I loved the map, and would study it for hours. You see I couldn’t re-read the book myself due to my low-reading age due to my undiagnosed dyslexia, BUT I could stare at the map and imagine myself going on the journey and experiencing Bilbo’s adventures. It was a visual tool that allowed me entrance back into the story. 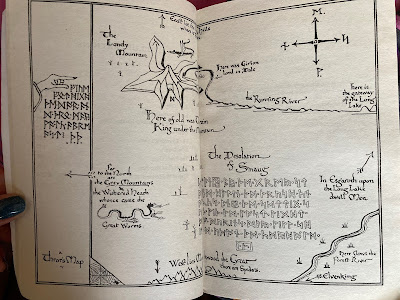 The next map I saw was when I was in my mid-teens was of One Hundred Acre Wood by E.H. Shepard. I loved it for its intricacy and pen-man ship, but it was a bit of a shock, as I already had seen it in bright Disney animation, with Poo jumping between the pages, the original is however much more intriguing and inviting, which is probably why the original fetched £430,000 at auction in 2018!

When I was at school I was good at both geography and art (both of which I went on to study at degree) so of course everyone put two and two together and thought I should pursue a career in cartography of course none one took into account my bad sense of direction, or the fact I didn’t know (and still don’t) my left from my right. However how that I’m writing and world building, I find map-making hugely helpful.

‘I wisely started with a map and made the story fit,’

Unlike the very wise Mr Tolkien, I usually start with a story, then when it all starts to get complicated, I put pen to paper and draw a map, (and characters and landscapes). But the map is probably the most helpful, and the only thing you can’t get anywhere else, unlike characters, where you can get photographs from the internet (or like Roald Dahl did, keep a stock of photos cut out from magazines and newspapers.) 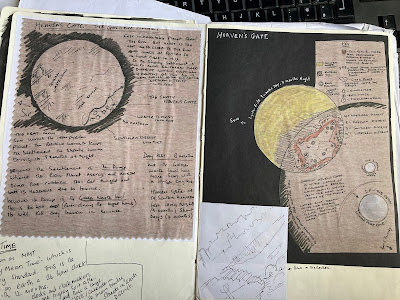 I have tried my hand at cartography for a few of my books, one a sci-fi fantasy YA, it was more of a drawing of planets and more recently I have tried my hand at a more traditional map for my WIP mammoth book, of both the geographical area and the main complex. It is so helpful to actually see where everything is in realisation to each other, and for unlocking key aspects of plot. Of course some writers like Terry Pratchett can keep it all in their heads, and never make a mistake, but for me I need to see it to really write it. 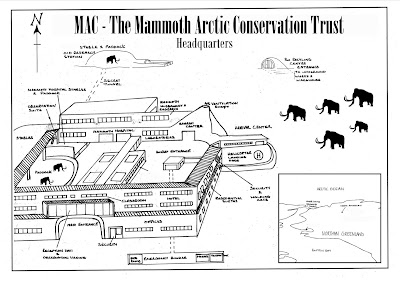 One thing I have discovered is that although I’m an artist by training (one thing I can do is draw!) Sadly my maps aren’t spectacular. In comparison however my 15 year old son, is a very talented map-maker. He had previously been commissioned to draw maps for peoples Dungeons and Dragons quests, and his world building is fantastic. He starts with maps, and then works on the biomes, eco-systems, faunas, flora, cultures, histories, cuisine, fashion, languages and mythologies. All these things are rooted and inspired by the original map and type of biome he’s created. I am in no way envious of his commitment or talent honest!
In fact I think maps are an essential part of world building – just as much as mind-maps as an essential part of plotting. Like Tolkien’s map of Bilbo journey ‘there and back again’ in The Hobbit helped me enter Middle Earth, creating map helps me enter the world and experience it, and even envision the environment , making it easier to describe but crucially see how the biome will influence the plot . 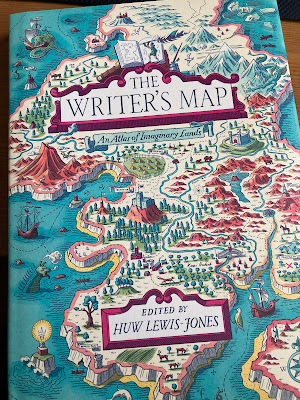 So if you haven’t tried drawing a map yet, I totally encourage you to do so, it really doesn’t matter about how well you draw (after all Tolkien wasn’t a great artist and his maps are possibly the most famous in fiction!) If you need any more encouragement I suggest you have a look at the beautiful celebration of fictional maps, in the lovely book The Writers Map edited by Huw Lewis-Jones, that explores fictional maps, and how to create them. 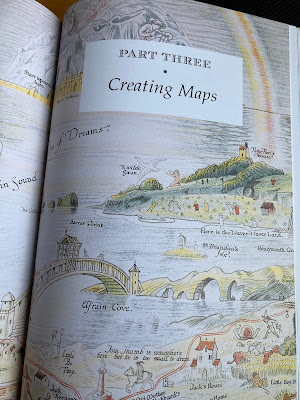 Email ThisBlogThis!Share to TwitterShare to FacebookShare to Pinterest
Labels: A Bit about Me…, Dyslexia, maps, World Building, Writing

The Rubber Ball of Doubt 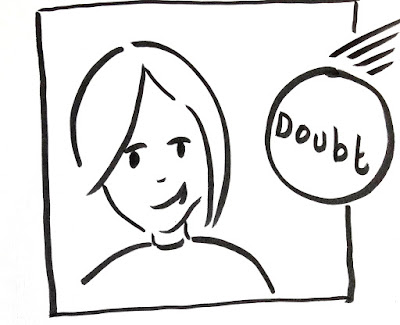 This week I had a serious dose of the Doubts. It’s a feeling I and many writers (especially pre-published) know well, as it happens again and again. In my mind doubt is made of rubber and like the song says, ‘Rubber ball keeps on bouncing back to me.’

One day I’m full of confidence, sure that I’m a good writer, convinced that my latest WIP has commercial appeal, a unique concept and a strong voice and plot. Optimistic that if I keep honing my craft and keep submitting that one day it’ll happen, I’ll get picked up and get my book in print. 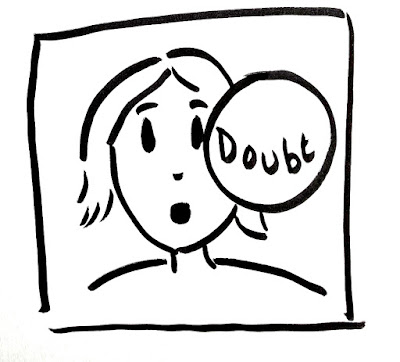 The next day I’m anxious and depressed mess as doubt crashes my positive party. Suddenly it’s, ‘My writing isn’t good enough.’ ‘My writing will never be good enough.’ ‘My extra issues that my dyslexia pose are getting worse raising the hurdles higher and unsurmountable.’ The universe and time are conspiring to make sure that my dream of becoming a published author is never happens’.

So why is it that one day I’m so optimistic and the next I’m full of pessimism?


So why does it get me so down with doubt? 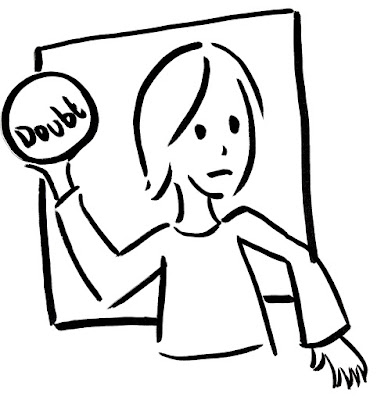 So when all these doubts pile up, I have to pull myself up. I look at things logically, and see that the facts haven’t changed. I’ve have still had competition long-listings, short-listings and wins, which seems to confirm I’m not totally bad at writing. I still get more bespoke responses from submission that standard ones. I’m still working and improving my craft. I’m still dyslexic, but the industry is make positive steps to try and make it easier for people like me to get published. 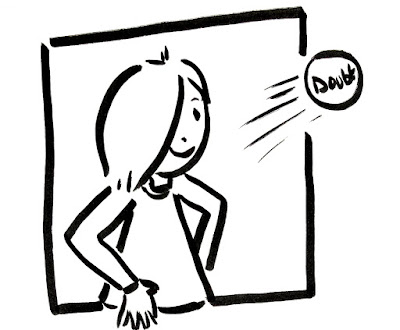 So why when I tell myself all of these things and throw that ball of doubt away, does it always come bouncing back with more velocity? 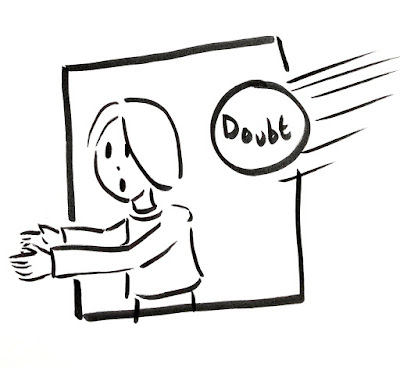 I don’t know why the rubber ball of doubt seems to hit harder each time, but I do know this; The children’s writing & illustrating community is so supportive of each other, that when I get too tried to throw that rubber ball away, someone, will say, ‘hay, take a break,’ and they throw the ball away for me instead.

So sometimes I get down, but I love writing, and I’m surrounded by wonderful supportive people, and we all help one another when that ball of doubt land in our court. So writing onwards I go… 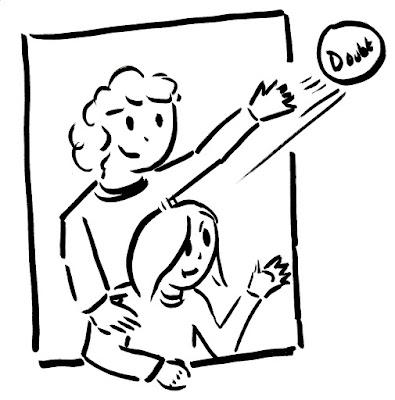 Email ThisBlogThis!Share to TwitterShare to FacebookShare to Pinterest
Labels: A Bit about Me…, Dyslexia, Writing
Older Posts Home
Subscribe to: Posts (Atom)