What a great way to start the weekend, waking up to find that I've made the Long-List for The Chicken House – The Times Children’s Fiction Competition 2013! I'm utterly thrilled that; ‘Through Mortal Eyes,’ is in the long-list of 21! 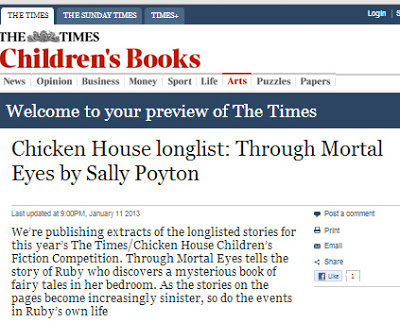 I'm even more excited to find that I'm amongst friends. My close writing Buddy Nicki Thornton, is also in the long list with her Tweenies (early teenage) mystery novel, ‘The Sleeping Beauty House’, which is an amazing book, with lashing of both mystery and humour.

Also, fellow SCBWI writer K M Lockwood (Philippa Francis) has made the long-list with her novel ‘Selkies of Scoresby Nab.’  I'm lucky enough to have read the opening of the book a while back so can truly say that it’s a great read that utilises the much overlooked folklore of Britain.

So I’d like to thank the reader that pulled ‘Through Mortal Eyes’ off the mountain of entries and submitted it for the long-list – Thank you!

Also to send hearty CONGRATULATIONS to all the Long-listers…

So I'm off to celebrate… 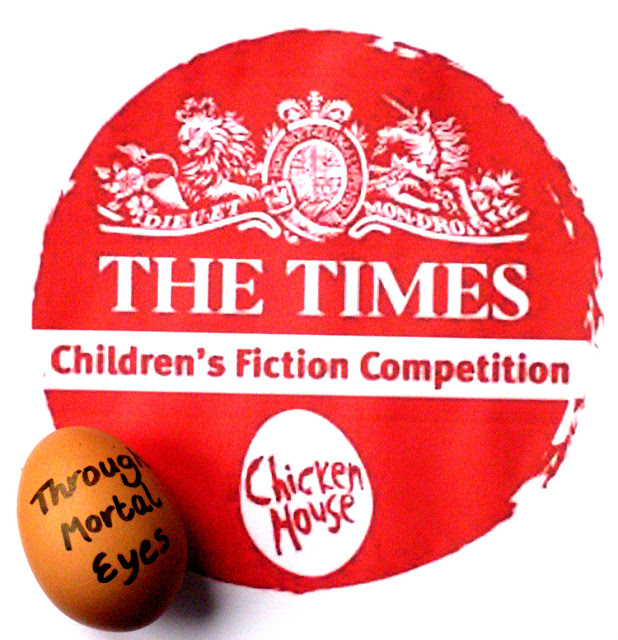 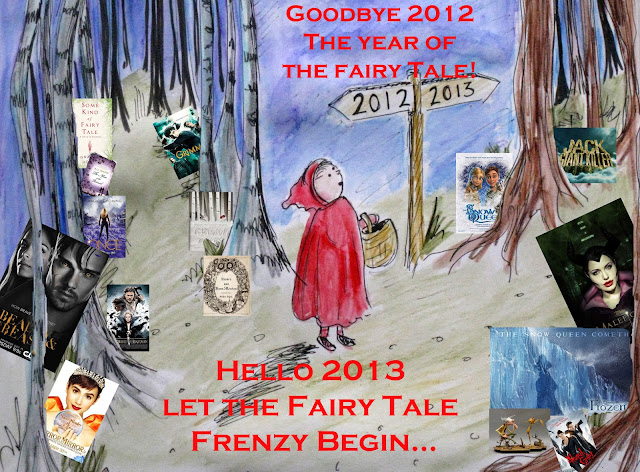 2012 really was the year of the Fairy Tale. As I detailed in my earlier blog posts (click here and here) it was destined to be fairy tale mad. 2012 did not disappoint, bringing gifts of Fairy Tale films, television shows and books that all built up to the finale; the 200th anniversary of the publication of the Brothers Grimm’s, ‘Children’s and Household Tales’, on the 20th December.

But wait, fear not, fairy tales are not ‘so 2012!’… 2013 has a whole host of fairytale delights.  Read on to review some of the highlights from last year, and what’s in store in the coming months… 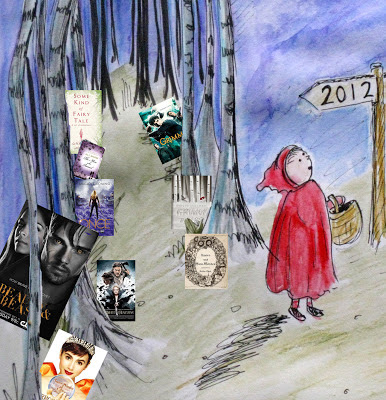 We had a fairy tale revival for the small screen, with the reboot of the 1980’s classic ‘Beauty and the Beast,’ ‘Grimm’, and ABC’s  ‘Once Upon A Time’, starring Jennifer Morrison and Robert Carlisle.

We had fairy tales hit the big screen too, with varied levels of success. For my money, ‘Mirror Mirror’ being on the poorer end, but then ‘Snow White and The Huntsman’ proving that Hollywood can pull off a good Fairy Tale Yarn. I think the key difference between the two film bases is simple, quality of the writing team; ‘Snow White and The Huntsman’ hired; The Sussex Centre for Folklore Fairy Tales and Fantasy, to be consultants for the film!!!

It wasn’t just western film makers, China’s film goers were also treated to a fairy tale caper; The ‘FairyTale Killer,’ about ‘A fearless cop is appointed to investigate a series of puzzling murders which resemble Fairy Tales.’

September saw the ‘After Grimm: Fairy Tales and Story Telling Conference’ in London. (Click here to see the right up in the SCFF Newsletter).

2012 saw a fair share of fairy tale literature, I can’t go through all of the fabulous books, but here are a few. Graham Joyce, the author of one of my all-time favourite fairy tale-esk adult novels, ‘The Tooth Fairy’ published his book ‘Some Kind of Fairy Tale.’ Alley Shaw followed up his award winning ‘The Girl with glass feet’ with his second fairy tale novel for adults, ‘The Man Who Rained’

Then in autumn we saw the hugely anticipated Phillip Pullmans ‘Grimm’s Tales for Young and Old’.  This book is truly beautiful, with a cover that is so inviting it looks like you can walk straight into the books. What’s between the covers is even better, with a fascinating introduction, and compelling retelling of a selection of The Grimm Brothers most intriguing (not necessarily best known) Tales.

And finally, the 20th December was the bicentenary of the first publication of Jacob and Wilhelm Grimm’s ‘Kinder- und Hausmärchen’.  With wide celebrations in Germany (click here for more), and an interesting series of programs on BBC Radio 4 (press here to listen). This rounded up a fantastic year. 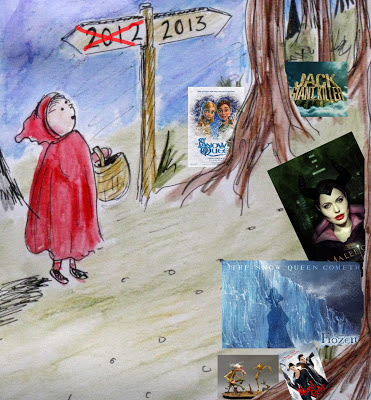 2013 sees more Grimm adaptations but it also welcomes Hans Christian Anderson to the party. Yes The Snow Queen see’s not one but two animated adaptation's for the silver screen. First come Wizarts ‘The Snow Queen’ which is Russian made CGI picture (press here to seethe trailer). Later we have the Disney version ‘Frozen.’

Pans Labyrinth’s director, Guillermo De Terro’s animated ‘Pinocchio’ is currently in post-production, so will hopefully be released in 2013 and the images that have been released so far look stunning (press here). Although sadly there is no new news on his live action ‘Beauty and the Beast’ at present. But one thing is certain, if Pan’s Labyrinth is anything to go by, then both these films will be true fairy tale – *can’t wait!*

Other things in the making include the Disney Sleeping beauty adaptation that sees Angelina Jolie taking on the title role as the evil sorceress ‘Maleficent’ (Press Here to see Angelina in costume).  And there are rumours of a new live action Disney adaption of ‘Cinderella’ due to be directed by Mark Romanek (director of One Hour Photo), and starring ‘The Hosts,’ Saoirse Ronan. (to read more press here).

One thing is clear, the Fairy Tale rival is still going strong, with more films being commissioned, and an ever growing audience with a thirst for fairy tales that reference their heritage, not shying away from things that go bump in the night.