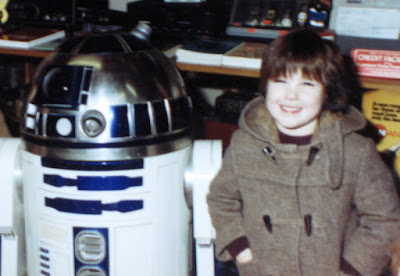 Stories and powerful and they can grow with you, for me the Grimm’s Fairy Tales have had a perennial appeal, with so many layers that I enjoy them a much now as I did a child. Tolkien’s Middle Earth, is another – every time I read Lord of the Rings, there’s something new, another dimension, which I hadn’t seen before.

Other stories, are fine for a certain time, like; The Neverending Story, it was perfect for me from the age of 6 until I was about 12, terrifying and absorbing, but now, watching or reading it just doesn’t affect me in the way it did when I was a child.

Star War is above and beyond any of the other stories with how it has stayed with not just me but millions of people, throughout or lives. Simple plotlines, high-concept and increate world building, in short – (or at least for the first films episode IV, V & VI) excellent storytelling. And of course being born in the late 70’s I was weaned on Star Wars. 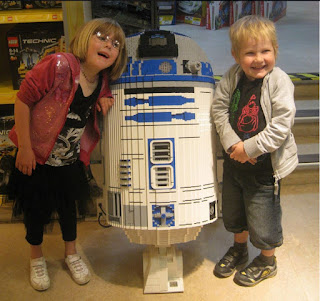 My earliest memory of Star Wars is being mesmerised by it whilst watching it on our one TV – a massive wooden piece of furniture with no remote and a small screen, on Christmas day. Star Wars is synonymous with Christmas in my mind as it was on every Christmas day when I was young. But we only ever watched it at Christmas as VHS Videos were expensive, and we knew it would always be on over the festive season.

At Infants school, I was a tom-boy and played with almost exclusively boys, and we ALWAYS played Star Wars, my friend Luke – ALWAYS got to play Luke. The Twin’s (both boys) argued over who got to play Han Solo, and I was ALWAYS Leia as I was a girl. I do recall being quite annoyed at this, finding rather unjust. And at home, we had a second hand Millennium Falcon passed down from one of my older cousin, which we played with LOADs. 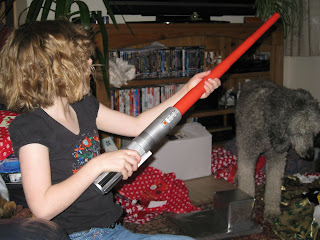 When I was quite small I got to meet R2-D2 or at least the Model. The actual Model that was used in the films. This was due to the Star Wars props being stored locally, in a warehouse in Abingdon, and the R2-D2 was displayed in a tiny electrical shop in north Abingdon, so we (me and the Twins) went to visit it. This may not sound exciting now, but this was before Comic-Cons, and conventions, so it truly was very exciting! 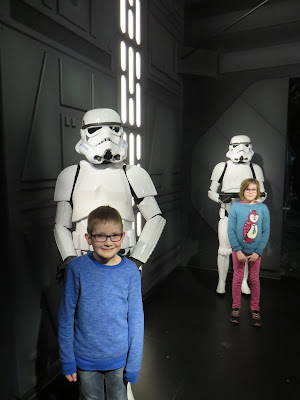 I remember the shock of finding out Darth Vader was Luke’s father, unfortunately a Saturday morning TV show, (I think the one with Roland Rat) revealed that spoiler. On the Monday everyone at school were excitably discussing if this could be true! Of course when we actually saw it – it was, and it was still a massive shock. It’s the first real story twist I can recollect. Mind you, I think the next twist – that Luke and Leia were twins – was more of a shock, as we were all convinced they were going to be come boy-friend and girl-friend! 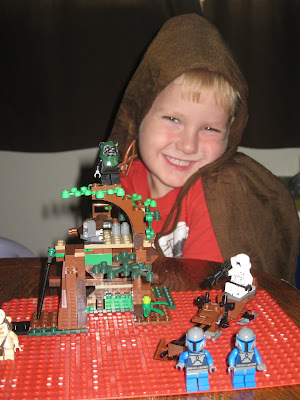 I LOVED the EWOKS - and both their spin of their films, and the animated TV serious. I can remember suddenly getting addicted to Dairy-Lea triangles, so we could collect enough tokens to get a VHS video of both the Ewok’s and R2-D2 and C3P0 animated series. Me and my sister watched them over and over until they were unwatchable. 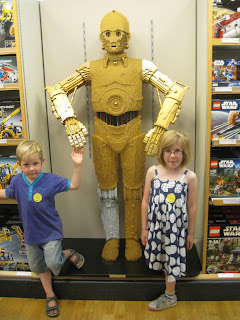 Then everything changed. Christmas day came, and there was no Star Wars. Instead there was Indiana Jones! And so Star Wars faded into the back of mind. Until I was 17. Having just passed my test I was designated driver – and drove my friends to a party in West Hanney – in rural Oxfordshire – only to find we were going watch A New Hope. Initially sceptical – why watch something so old? But then, as we all sat around drink cheap coke and eating crisps I realised - I loved it. I went straight out and brought the trilogy of VHS tape. 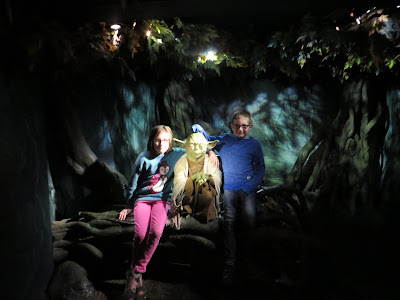 Roll on a few years, and I’m at uni, and getting excited about the prospect of the new Star Wars movies being made. I lived with a girl who was Sci-Fi obsessed. She had massive collections of toys BNIB and new every episode of Star Trek by name and could almost recite every piece of dialogue. She also loved Star Wars. So, me and my friend were in a Chichester Comic book store, when the owner told us the news that Ewan McGregor, had been cast as Obi Wan – and we had a heated discussion on whether he was a good enough actor to fill Alec Guinness’s shoes, I said no. They said yes. 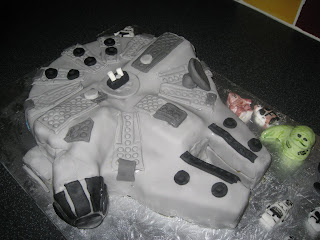 The next bit of excitement was seeing the posters, of young Anakin Skywalker walking through the desert casting Darth Vader’s shadow.

Eventually the Episode I - The Phantom Menace was released I went to see it with my then boy-friend and his Dad. WE even splashed out to get the big arm-chair seat in the back of the cinema in Oxford. We were all excited, but I think my Boy-friend’s father was the most excited of all. We all liked it - with the exception of Jar Jar Binks - who - I really do believe is the most annoying character in any film ever. I also have to say here, that I think it also features the cheesiest piece of dialogue in a movie ever - when Liam Neeson utters – ‘There’s always a bigger Fish!’ Over all we came out having enjoyed it but with a bit of a sting of disappointment –after all it was a very different movie to the first three. 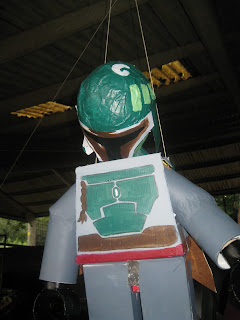 When episode II came out me and the same boy-friend - now husband -went to the tiny cinema in Wantage – but sadly without his Dad who had passed away. Maybe it was the lack of my father-in-law’s enthusiasm, maybe it was the wooden acting of certain cast members, or just that it wasn’t such a great movie, but it was a bit of a disappointment. So much so that when episode III came out we waited and hired it on DVD and watched at home.

I personally was so disappointed by episode 1-3 that when we started replacing our VHS collections with DVD’s I refused to let my husband get the boxed set of episodes 1-6 so instead we got the box set of the first trilogy. 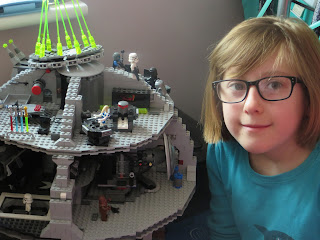 But Star Wars keeps coming, and when our kids got to school age they both became obsessed with Star Wars. Of course this was the age of the Clone Wars and when Lego made the inspire decision to make Star Wars sets –so e quickly had Lego Star wars models everywhere. My husband was keen to share the movies with the kids, so we borrowed the complete dvd collect from a friend and watched them in episode order. I will forever feel guilty for this, as the kids never experienced the ‘I am your father’ revolution. 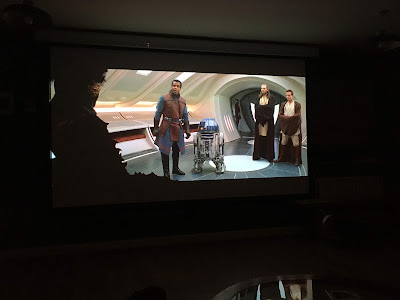 But the kids quickly moved on to Harry Potter, and Marvel and Percy Jackson, and Star Wars was again pushed aside, until Disney made their move and the new movies started to be realised. We watched them when they came out, usually on DVD. But waited for the last in The Skywalker Sage episode IX to come out on DVD, and as we waited w used Lockdown to watch every Star Wars movie, including Rouge One and Solo in chronological order of the story. We all really enjoyed the experience, especially after we got through episode 1-3! I have to say, although I like episodes, Vii and VIII and wasn’t quite so taken with the episode XI. We’re also just finished watching the season one of The Mandalorian, which I actually think is truer in storytelling style and simplicity to the original tree movies than any of the other films. We are very much looking forward to season two. 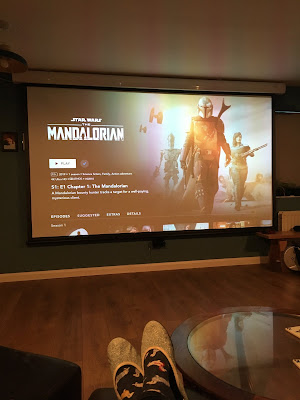 Star War, has been there through my whole, life, and it’s interesting to look back to see how it’s shaped my idea of storytelling, I can see shadows of it in my writing form time to time. Despite being disappointed with some of the movies, I still love them all. They are a package - like family – some members you love, some you tolerate.

So May the 4th be with you. And BTW – I have actually now, permitted by husband to by the complete Skywalker sage on B-ray. 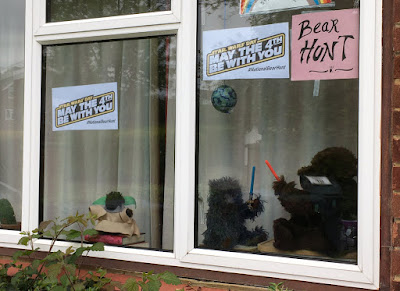